In the following paragraphs, I describe my experience so far in photographing business portraits. My opinion is in this matter, skill is valued more than art. Routine and experience rather than creativity are what you need to perform this task. However, the photographer’s personal approach is also an important asset.

There are several challenges I have encountered while shooting corporate portraits and I’ll go through them here.

The success of shooting is really not only in the expertise of the photographer but also in whether it is pleasant for you to work with him. Artists can often be unpredictable, or uncomfortable to collaborate with, and if they are successful, I know some arrogant ones. That is why a professional approach and pleasant communication are always the most important to me. Moreover, I keep in mind that people who need business portraits are not professional models, they might not be relaxed, or have a little discomfort and nervousness, and none of that should be seen in the photo. So, I might say that I did the best portraits while talking to clients when they were not aware that I was photographing them.

When a company team is to be photographed and will be displayed on a website, one should think not only about the appearance of the person being photographed but, believe it or not, about the background. All team members are photographed in front of the same background, whether light or dark, but that does not necessarily mean that the group of photos has a background of the same tone.

How is it that the background is not the same tone if we do not change the studio lighting and the relative position of the models?

This can happen for several reasons. The models do not stand in exactly the same place, so the shadows on the background as on the model change. Often only 3 reflectors are used, and for an ideally evenly lit background, two should always be parallel to the edges of the frame facing the background. Often the model does not stand completely parallel to the background so it is necessary to photograph at an angle to the background, and by moving the photographer, the frame changes, as well as the background in the frame. Hence this time, in the example I show you below, the reason was the change of the studio. It is simply impossible to gather a team of 15+ people on the same day to be available for the photo shooting. Not only did we change the day of the photoshoot, but also we changed the studio so the lighting conditions were different. Take a look at the example of background equalization I did for them – so when photographing multiple business portraits for a website, you should also keep in mind the appearance of thumbnails, ie that the size of the figure, frame, be similar to the background tones in all photos. 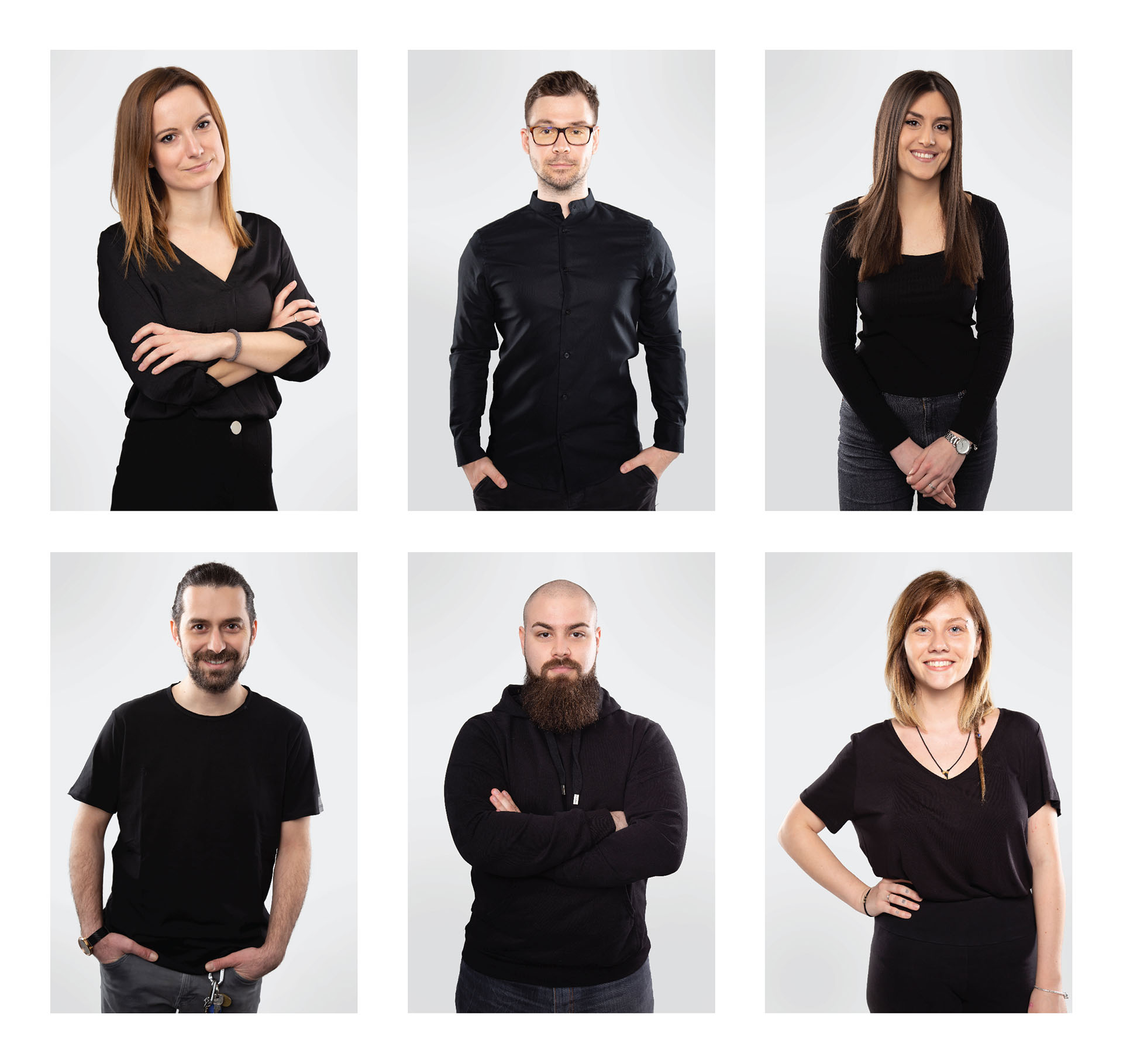 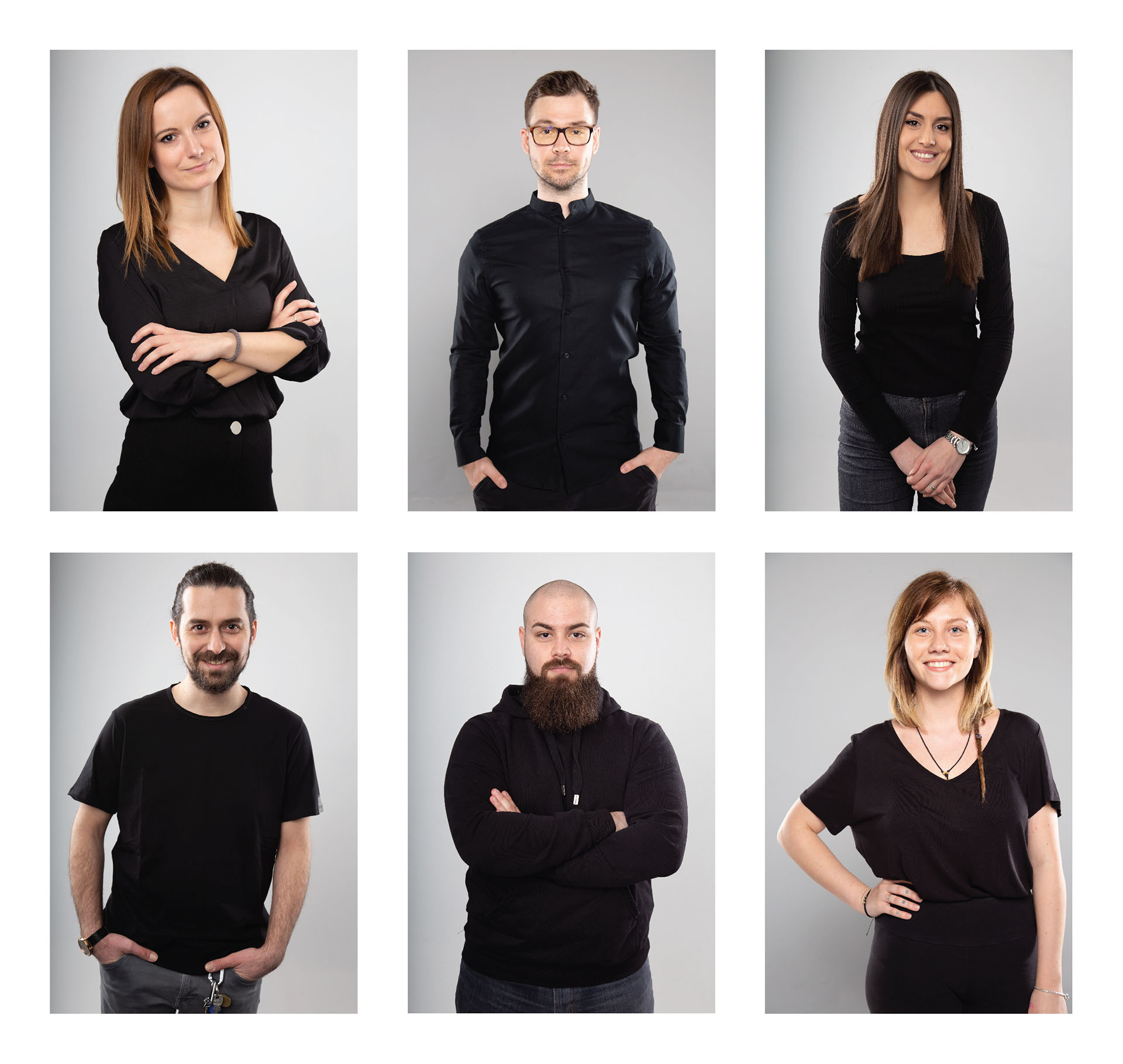 How important is the choice of lighting?

I couldn’t emphasize enough, but in short – the most important.

This is where the adaptability of the photographer, his power of improvisation, and his creativity come to the fore. From my experience, people are often, but not always, not happy to do business portraits. Sometimes they are required to do so by their superiors, or it is a necessity on business networks like LinkedIn, UpWork…

In the two photos below, I show you an example of a subtle change of light, which I made while testing the lighting.

Considering that they are test shots, pls focus on the light, and not the pose. You will notice that the first photo with darker shadows gives a noticeably sad atmosphere, maybe melancholic if not depressing, and therefore a slightly more intimate and “artistic” sentiment. In the second photo, adding another light shows a more optimistic impression.

This play with the atmosphere with the help of light is often a means that I see in newspapers where portraits of politicians are shown. If, for example, a photographer is given the task of photographing someone who is talking about the coming crisis, then often the photographs are dark with deep dark shadows. The same person in the election campaign was presented brightly lit from all sides with many spotlights, because this time it is about promises, positive attitudes, and plans, and then the portraits reflect an optimistic spirit.

This does not mean that either of these two options is wrong. This means that the skill and creativity of the photographer can be seen in the atmosphere in which the portrait exudes, which is reflected in the choice of lighting.

The expected result of the gradation of emotions from the most positive to the most negative, according to my prediction, would be in this order: 1 >> 2 >> 4 >> 5 >> 3 >> 6. My conclusion is that light, perhaps more than facial expressions, reflects the mood of the subject we are shooting. If anyone ever does this experiment before me, let me know.

What is the client’s profession?

What is the position of the client and what is he doing? These are important questions. I would not photograph an artist and a lawyer in the same way as a teacher and a manager. I don’t have any cliché advice on how to photograph occupations, but as I said earlier, I share my experience with you so far. 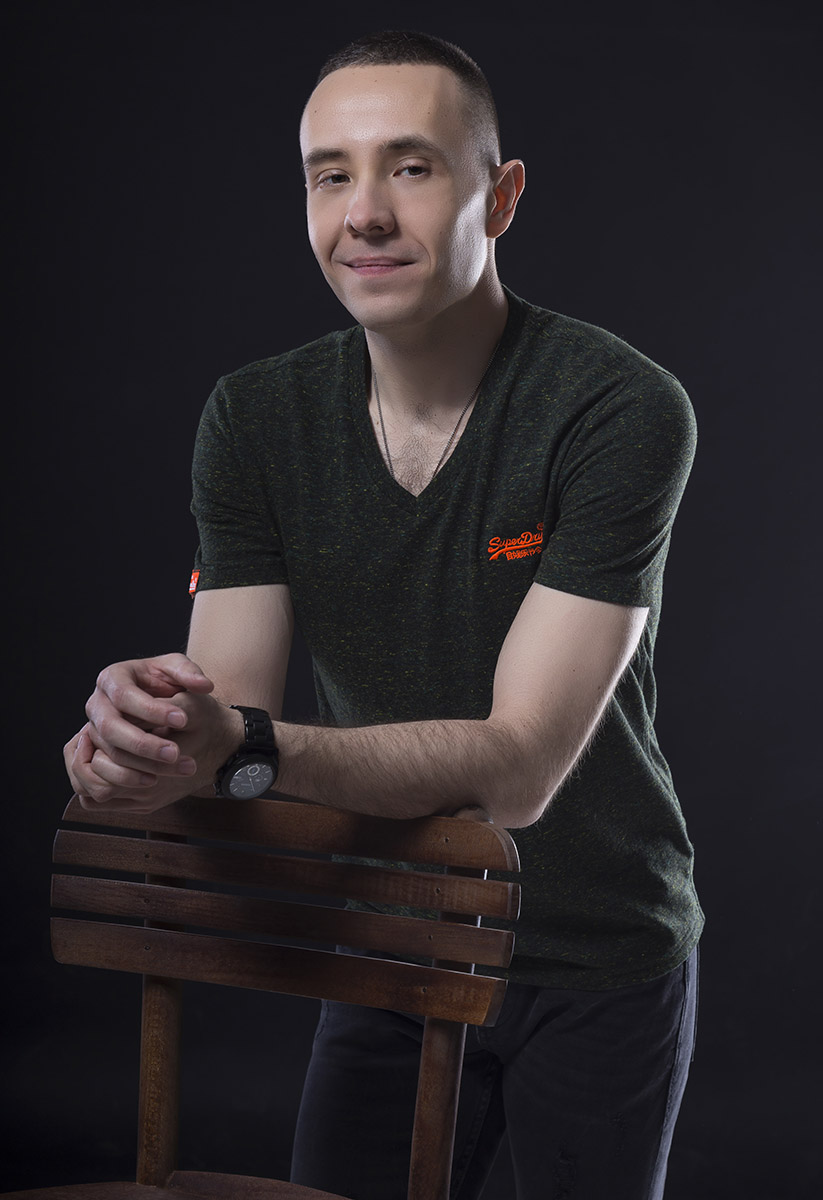 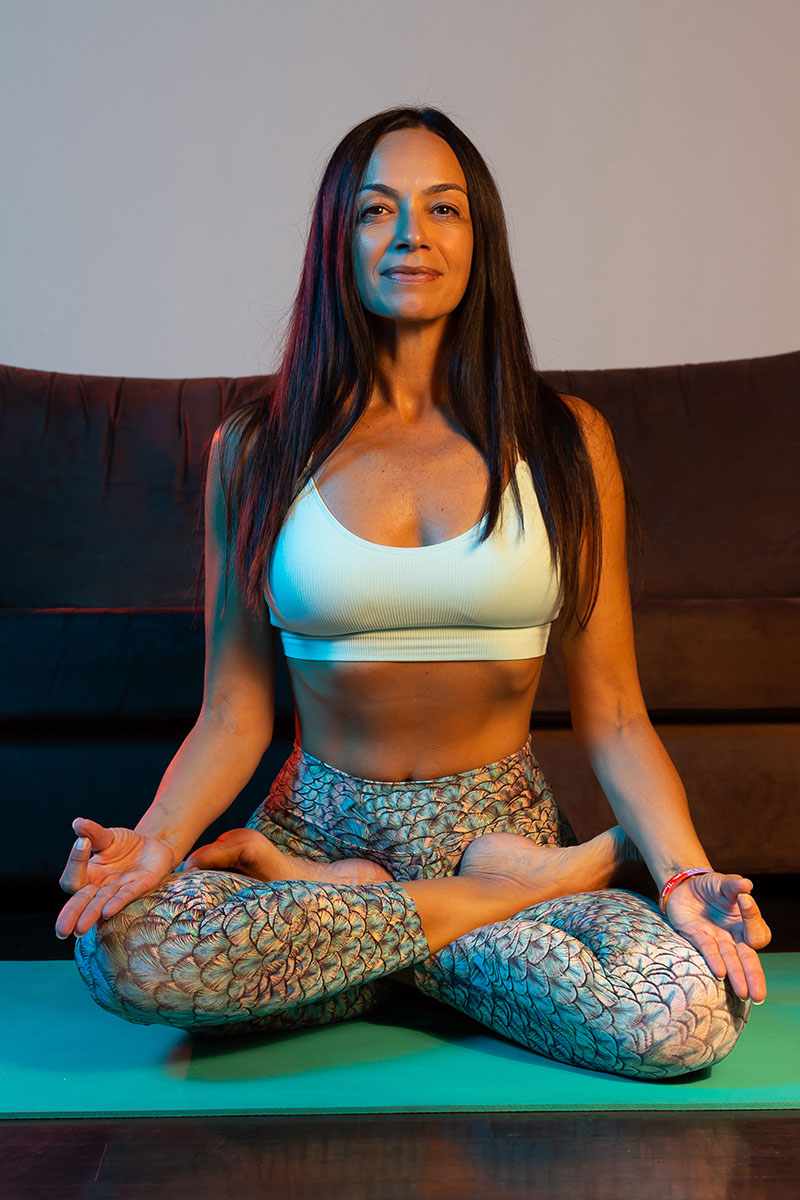 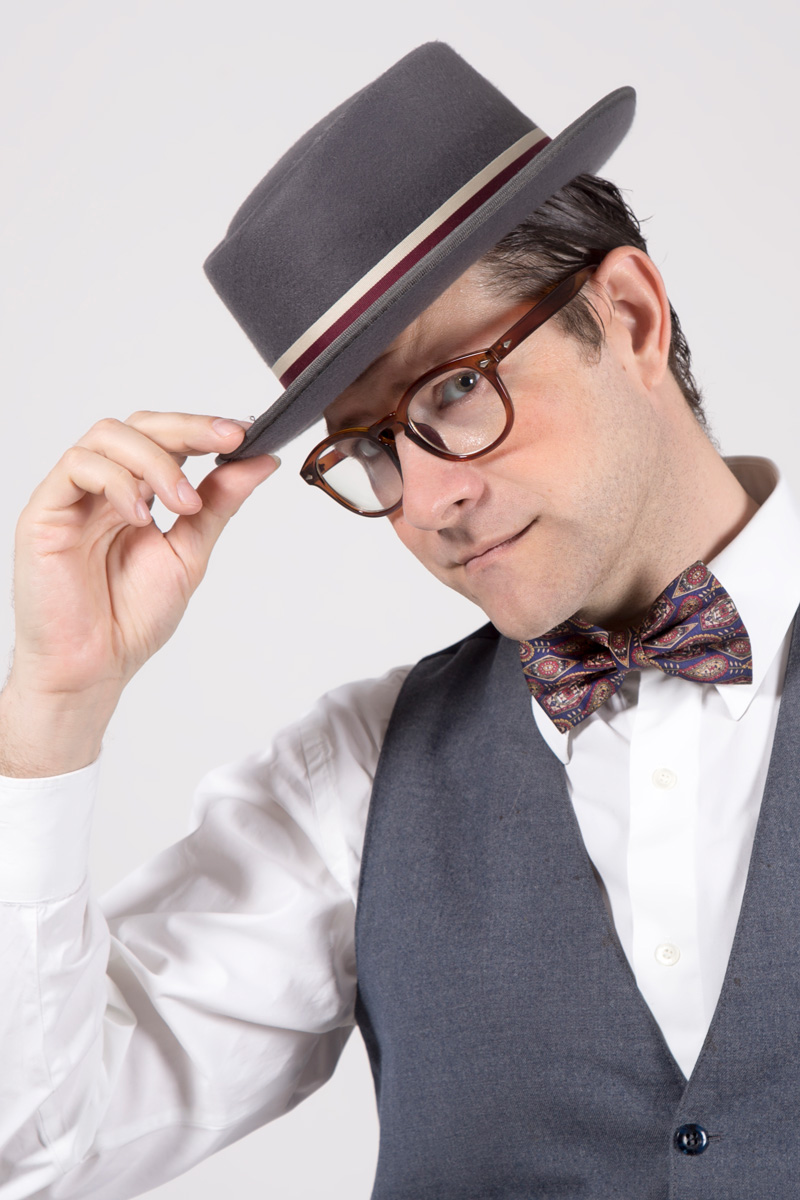 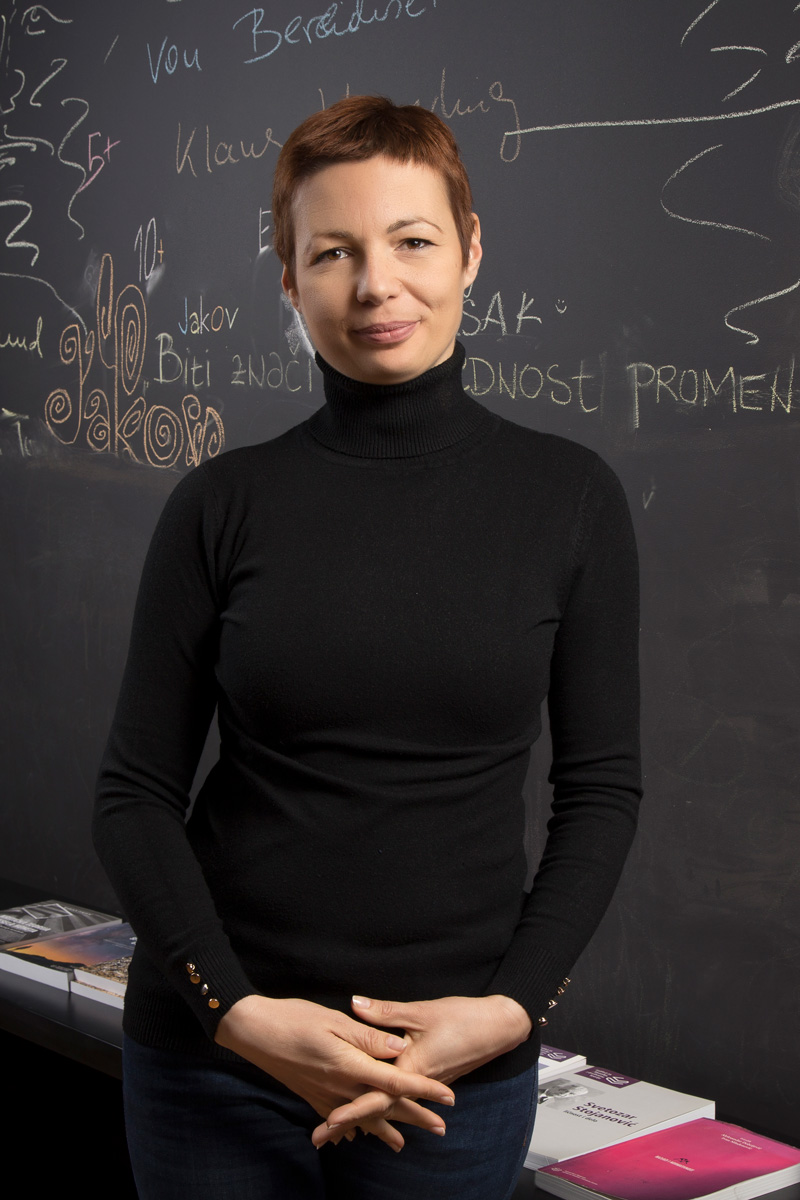 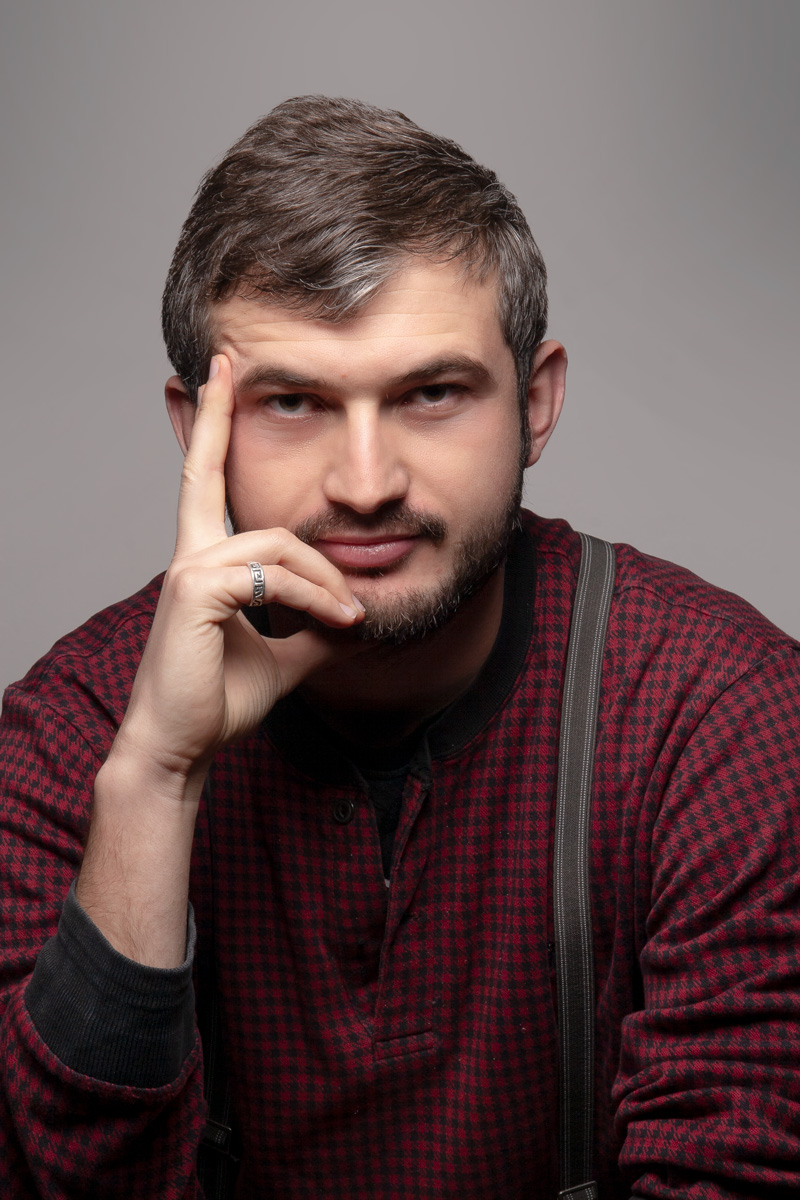 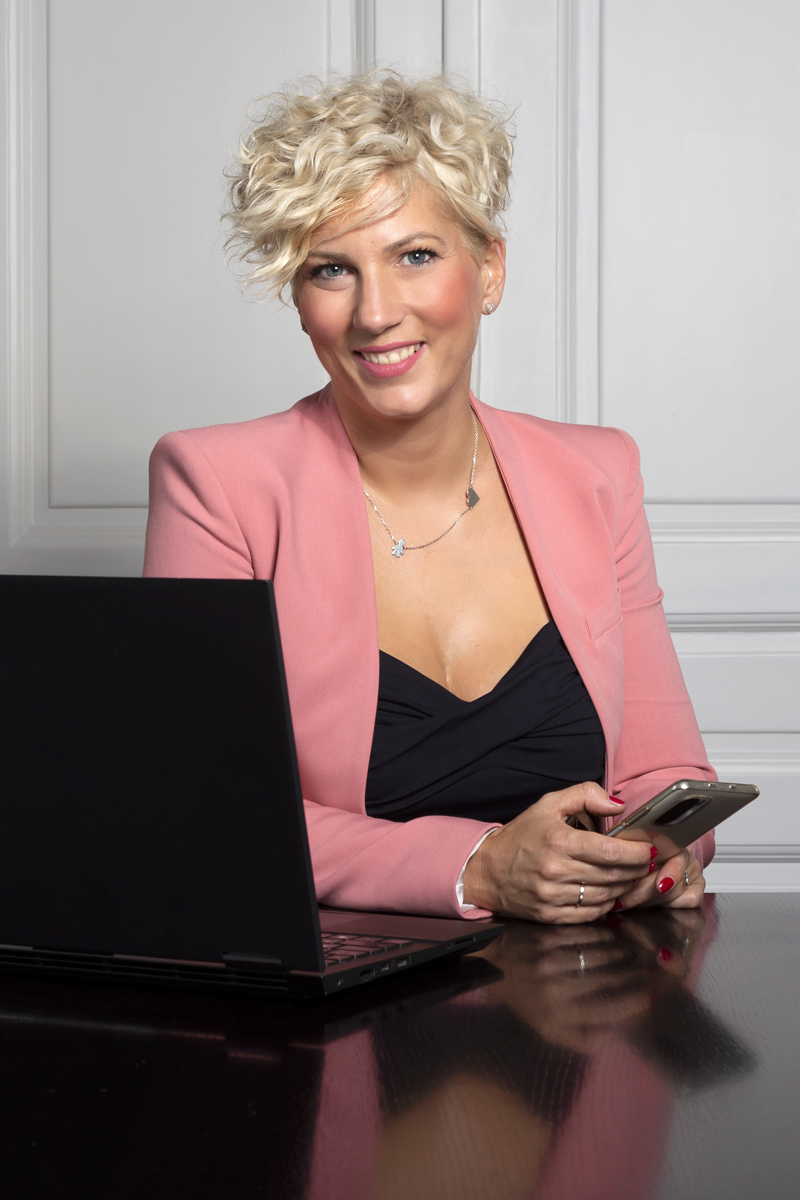 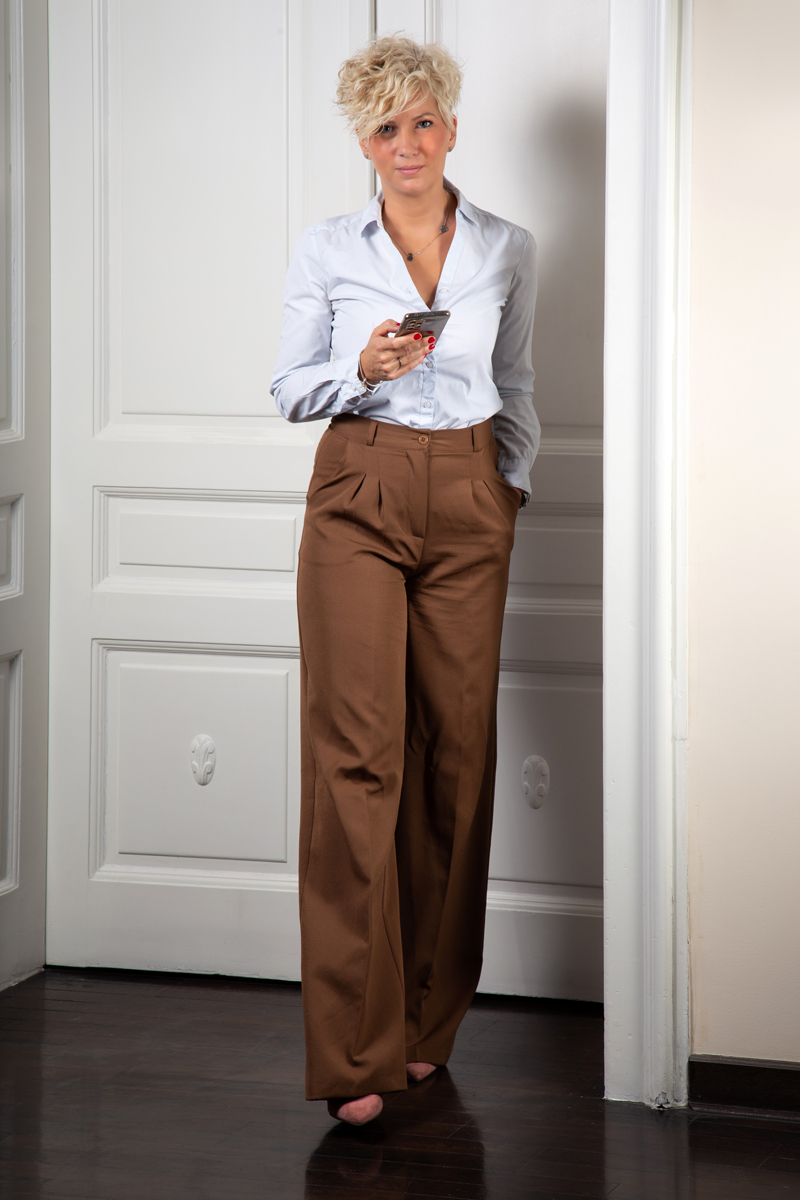 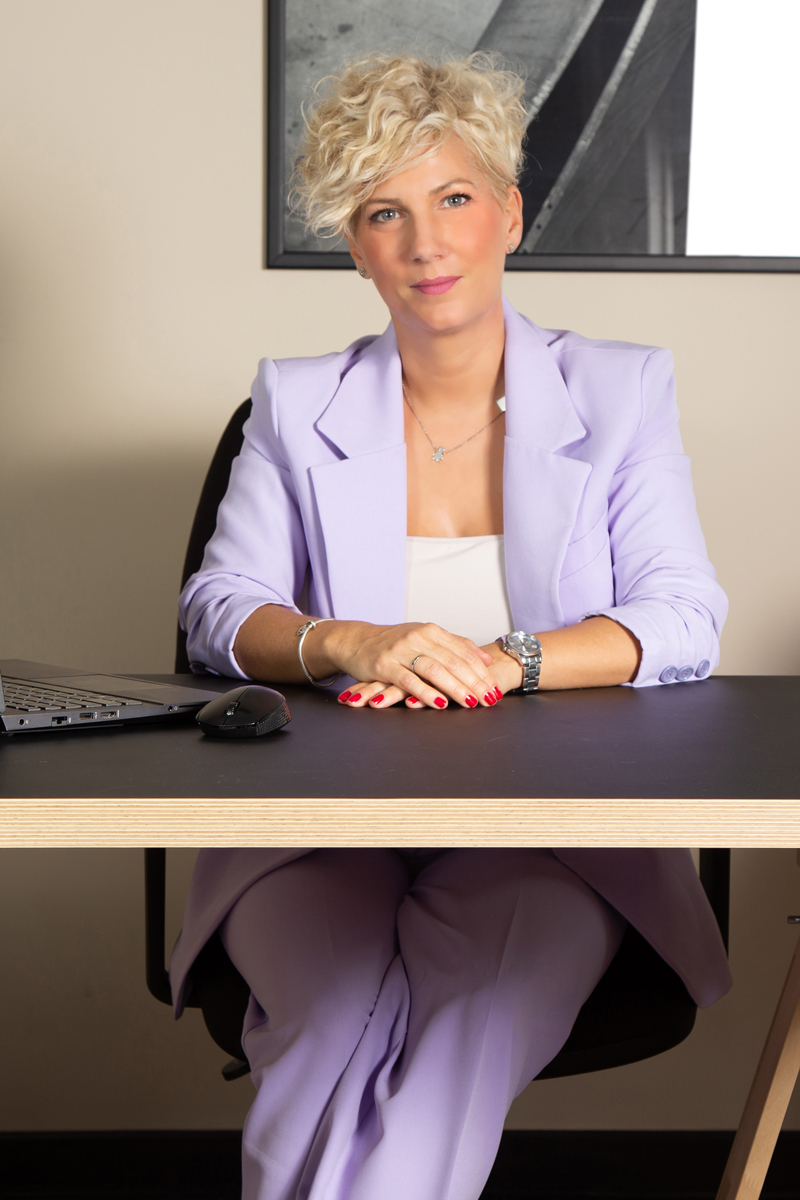 Choice of the background tone

Here is another interesting reflection on the topic of background.

I photographed singer Bane a few years ago in the studio, following an invitation for a New Year’s Eve commercial. The request was a white background to insert the design into. Any one-color background stands out from the subject, but of course, a light background because it is optimistic, invites joy.

So we did that photo with champagne inviting for a celebration of the new year and a whole series of photos for the same engagement. However, I still asked him to do a couple of shots with a darker background. It was my little curious instinct, because, from my experience, the most beautiful songs, the best ideas, the most emotional lyrics are created in loneliness and a kind of darkness. I really think that an artist is created in solitude when he is isolated. The applause and everything that follows is just the end. So I wanted to transfer his “subtle” artistic soul to the photograph while he was performing the song. Bane is an exceptional person, witty, smiling, eloquent, but I looked for a more intimate shot while singing in a darker atmosphere. I think I was on the right track 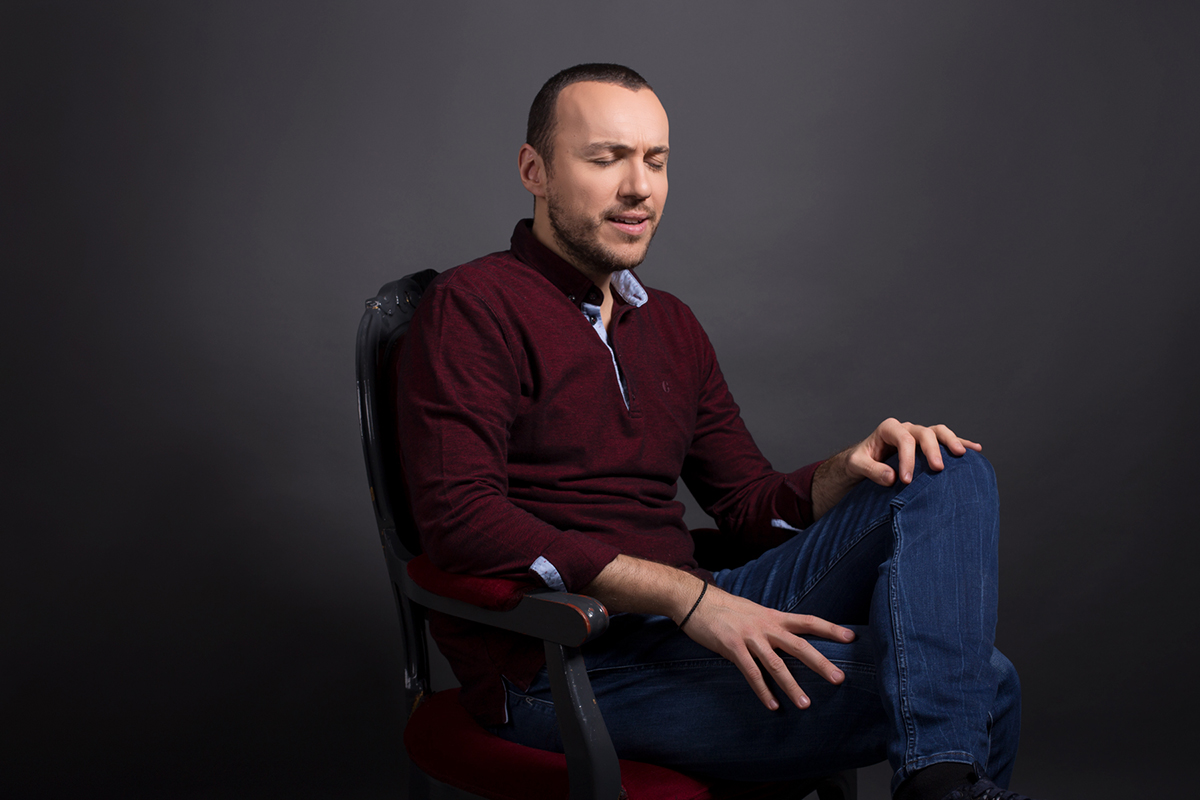 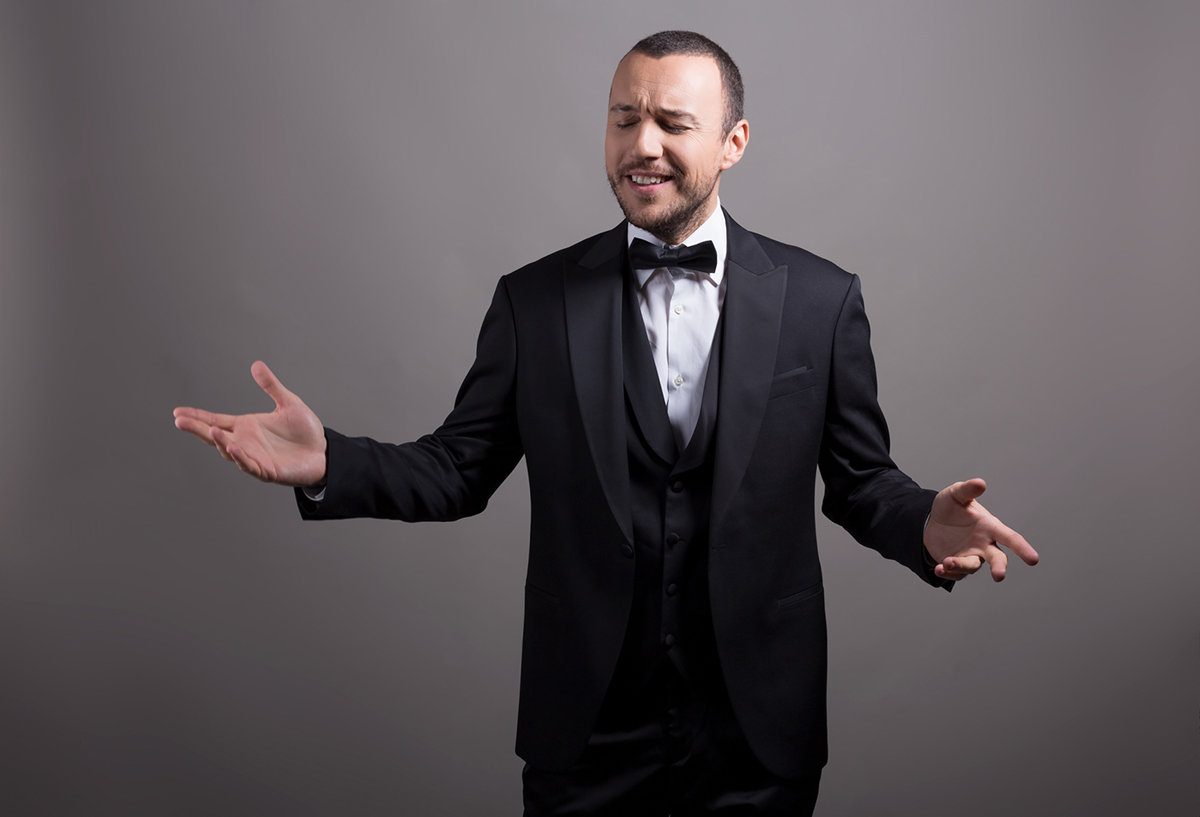 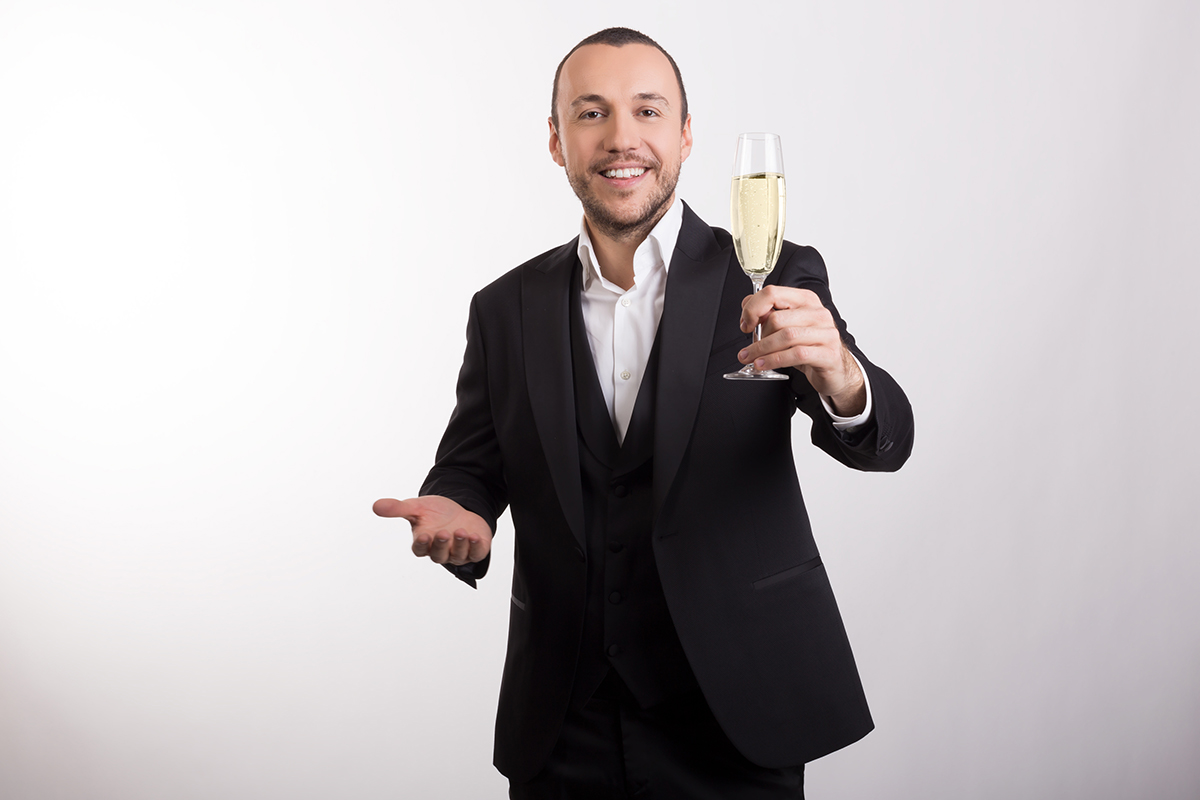 Striking a pose while being photographed

When looking at these two photos, we quickly conclude that the model seems dark and serious on both of them. I photographed a theoretician of philosophy, a doctor of science who is preoccupied with immaterial, perhaps it is better to say, non-utilitarian knowledge. Both photos depict his occupation, but in a different way. That is where the power of the photographer is shown: in the first photo, I chose to have him away from the camera, shaded by continuous shadows. Notice the white line of light that runs from the left side of his figure down from his forehead, over his neck and shoulders along his arm parallel to his torso. The sharp contrast line is different from the soft broad spotlight on the right side of the frame. The model is surrounded by black empty “negative space“. Even though the negative space is empty and devoid of content, it gives the image an atmosphere. The absence of content does not mean the absence of interest – it arouses interest, because it has the power to highlight the object in the picture in a completely different way – with an emotional dimension. If we were to freely interpret the portrait, we would say that the model is engaged in some work that requires solitude, mental work, individuality or if you want literally – a darkened room. Surely, this photo says that his occupation is not working with people, team sports and the like.

In the first photo, moving him away from the viewer, I emphasized his isolation, while in the next photo I brought the portrait closer, almost entering the thoughts hidden behind his high forehead. In the second portrait, I wanted to emphasize the determination of his character, the sharpness of his thoughts and, by looking into his eyes, we communicate with him. Perhaps I should mention one more technical detail that photography professionals pay attention to – although in both photos one part of the face is clearly darkened, both eyes should always be clearly visible in portraits, i.e. the shadow should not, in a technical but also an aesthetic sense, obscure either of the two eyes. For artistic or any other expressive portraits, these rules are not as strict as any other, but for a business portrait, this rule is unavoidable.

I often suggest to clients how to pose, but I talk less about “mere geometry” and more about the attitude they need to take. When you tell someone to “stand up straight,” they stiffen, tighten, and strain, so they don’t look natural. Instead of “straighten your spine, tuck your stomach in, pull out your chest, put behind your shoulders”, I usually say “take a deep breath” because then the body bends naturally and straightens, and the model feels better. This also depends from person to person, but there are many ways to communicate about this issue.

An interesting situation happened when I once photographed a large team of over 50 employees in a state-owned company. All the ladies from one department stood in the same pose completely unaware of that. They did not look at each other, nor did they know in what position this previous one was. I thought about how interesting and good it is. The overall impression is that the photos speak of the same attitude, aspiration, and a well-coordinated team that strives for the same goal. I would say that the pose shows the inner state of mind more than the outer appearance.

I don’t know how to explain this phenomenon, but I conclude that any engagement, even when it seems less creative, can encourage philosophical observations.

But one thing should always be kept in mind: business portraits are not made by professional models, but by people whose professions should be shown through them. That is why this engagement should not be taken lightly, even though it is seemingly simple and routine.

Clients I worked with

One of the portraits I did last year was published in Politika, the oldest and biggest newspaper in Serbia, visit this link or see below which photo is it.